The Forest Song is a first person adventure game set within a small village hidden inside the Polesia Forest in Eastern Europe. The Polesia forest has a rich history of mankind living with the Forest Spirits around them. Mankind must learn how to meet their needs while also respecting the spirits that live within the forest.

Players take control of a young man named Lukash during the last day of his life. By the end of the day, his wife who has been cursed, cuts down the Great Oak that represented a treaty between the villagers and the forest spirits. With the tree dead, the spirits react violently, expelling the villagers from their homes into the cold and unforgivable winter forest. And every day, Lukash is killed. He wakes up in his bed during the Early Morning before the Great Oak was cut down. Every day Lukash relieves his greatest nightmare, and it is his duty to discover the nature of his wives curse and how to save his village from themselves.

You could imagine this game as a mix between Majora's Mask and Groundhog Day. From a gameplay perspective, the game seems to follow a typical Adventure Game set of mechanics, but the structure through the use of the Time Loop is where the game becomes interesting. By completing certain Quests, you change the Time Loop. This change can effect other Quests, making them potentially easier or more difficult to complete. The Forest Song also has an open environment where many of the different Quests can be tackled in different orders. The Quests also connect with each other and really encourages Players to interact with the world around them.

Behind the Scenes Video 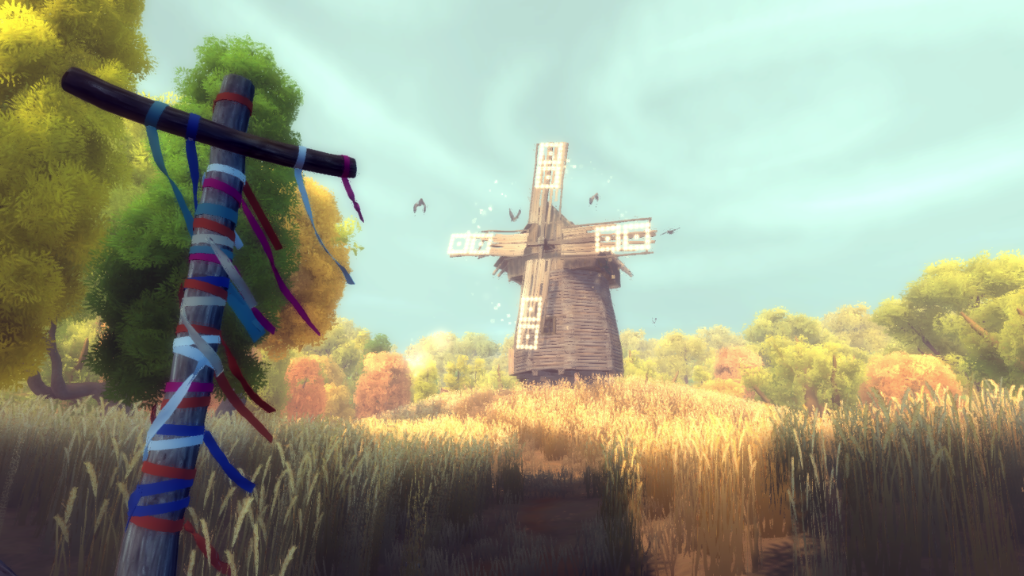 The Windmill and the Figura during the Morning

The Forest Song began development soon after Never Alone: Foxtales. A few of us decided to leave E-Line Media and instead began work on this game, under a new studio called Colabee Studios.

From the first day, we knew we were going to follow and extend the cultural concepts of Never Alone, but wanted to create a game that encouraged Players to actually use the knowledge they gained about the culture to help them complete the game. Whereas Never Alone was linear and about Challenge, we wanted a game that allowed Players to explore a world at their own pace.

We also knew since the first day, that the game was going to be based upon Ukrainian Folklore and Culture. Dima (the Creative Director) is Ukrainian himself, and wanted to create a game that explored his own culture and people. Early on, we picked the old Ukrainian play "Lisova Pisnya" ("The Forest Song") as our basis for the game as it is a story about mankind's relationship with nature.

When creating this title, especially while adapting a literary work, we had to make sure that we were being faithful to the characters and themes of the play. "Lisova Pisnya" is on the surface a love story, about a young man and a forest spirit that could never work out. But digging deeper, you realize it means a lot more, with one of the bigger themes being nature and responsibility. 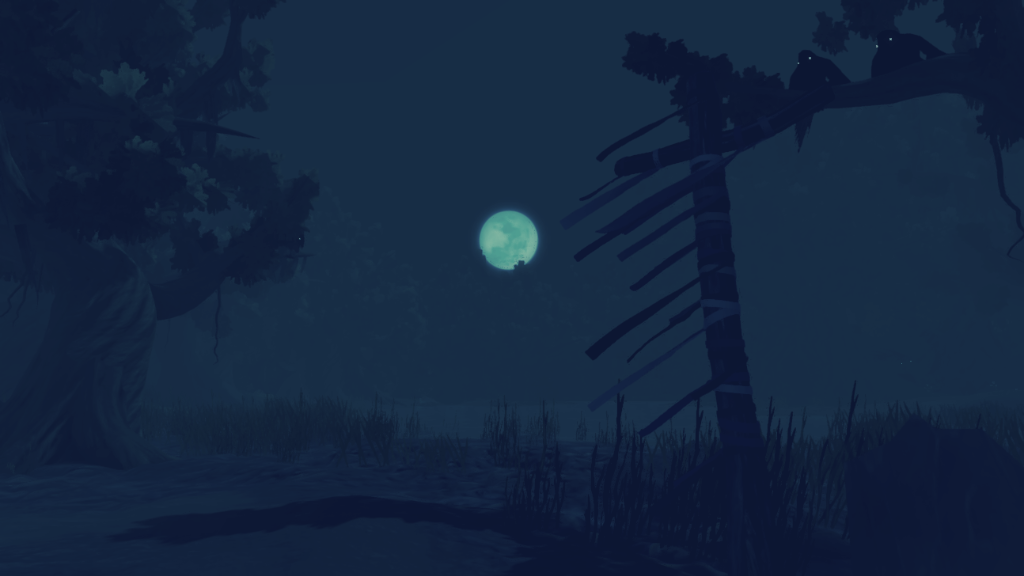 Different Events happen at different times of the day

These elements are not commonly explored in games and don't lend themselves to action or fighting monsters or other "typical" video gamey actions. And this was entirely by design. We knew we didn't want the Player to fight or kill the creatures in the forest, as that isn't the point of the forest spirits, in either the play or in Ukrainian culture.

One of the hardest challenges with these requirements/restrictions was to figure out what the Player actually did in the game, and who the Player is. Originally, you were a Spirit yourself, attempting to "heal" this village from destroying itself. The game design was meant to be more systemic where as this spirit, you could indirectly influence the events and emotions of the people of the village. By doing this, you gave them the power to stop certain events from happening and possibly leading to a different outcome. While cool in theory and on paper, it didn't make the Player feel a part of this world.

So instead, we made the Player be Lukash, the main character from "Lisova Pisnya". The narrative changed focus to telling a redemptive story for the mistakes Lukash had made in the past. By doing this and creating a strong central character, we felt we could better guide the Player into carrying about the world and the village's problems. Narratively and thematically, the village itself would be going through a redemptive arc as well. 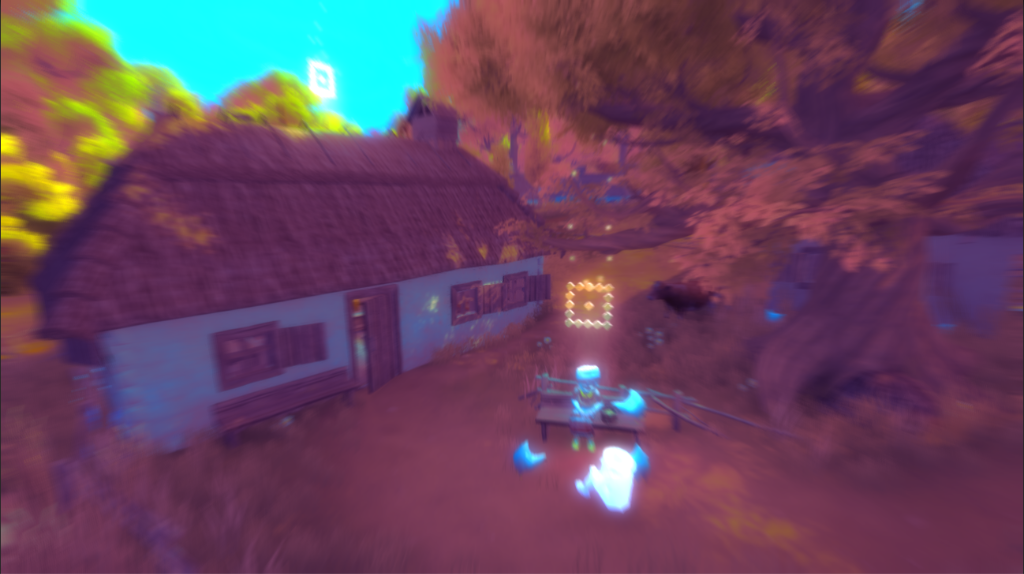 With the change in character/perspective, it granted us a set of new gameplay mechanics. Namely, Adventure Game Mechanics. But one thing we really wanted to keep was the idea that the reason why Lukash is special is because by playing his flute, he is able to see and experience the Spirit World. The Spirit World lets the Player gain new information about the world around them or see events/characters other people in the village couldn't see.

With a very basic understanding of the core principles of the game, we started to make a vertical slice, but in my opinion, we went about this process the wrong way... sort of. We started with experimenting with game mechanics.

For any other game, this is the right process. Find out if the mechanics work, then add the story and the emotion. But since our game is so heavily based upon the Player experience and their connection to this world, starting to design a demo from the mechanics first proved to be a problem.

Early on, we got a fully functional quest working. You could read a note with what your task was, rotate a windmill, pour grain, collect Embroidery Fragments in Spirit View/Flight, and complete the quest. Mechanically it seemed to be functional. But when we took it to playtesting, the biggest question people asked was "Why?"

Having already built a functional demo, we continued working on it, trying to include reasons of "Why". But the why that worked with the quest wasn't incredibly emotionally grabbing. But it functioned. Over months, we continued to polish and refine the game mechanics. Adding in a new quest and characters to interact with. Simplifying/ removing mechanics that proved to be uninteresting. The demo is now very solid, but we still get the response of "yeah its cool, but I'm not emotionally invested". 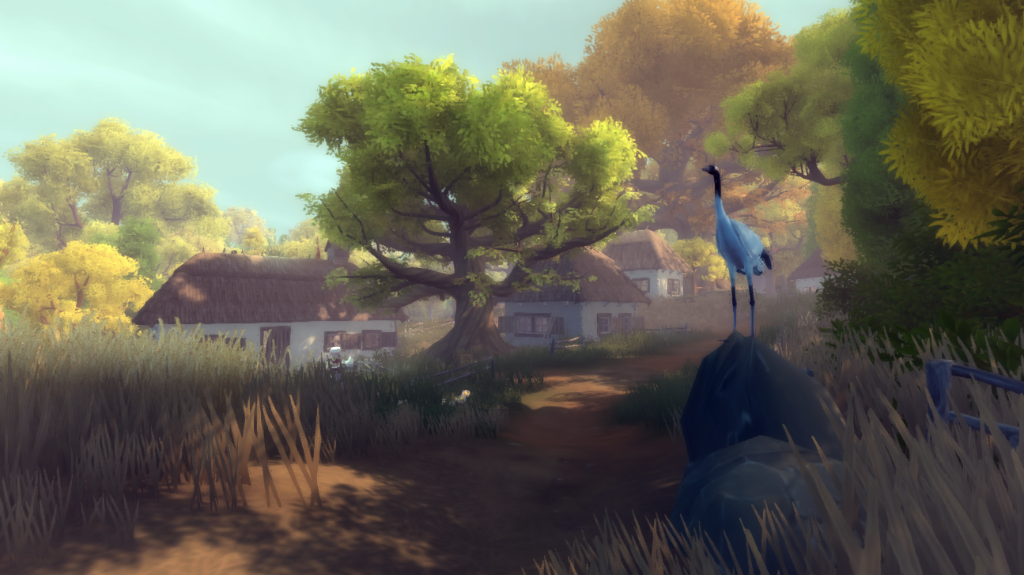 While making the demo, we continued to take it to shows and even won a few awards. Somehow the game has been picked up by nearly every tv channel in Ukraine and has been talked about on their equivalent of NPR.

We also were busy at reworking the narrative, particularly the Player's focus, and the overall game structure. Originally  planned to take place over three separate time loops, we simplified it to one time loop which focuses on saving the village and the character's wife. We also had to (due to budget and development concerns) remove more of the systemic game mechanics and instead focus on creating Adventure game-style Quests/Objectives.

Another failing of the current demo is that it doesn't show off the structure of our game. In an Adventure game, you would complete a Puzzle (or set of Puzzles) and then move on to the next area. Generally, after completing the puzzle, you would never think about that puzzle again. For The Forest Song we wanted to design the puzzles so that they all interconnected with each other. Finishing one Quest might change how another Quest interacts with the Player for example. This would also allow Players to craft their own paths through the game as we would block very little off from them. In earlier prototypes of the game, you could choose what Quests would be complete when you started a time loop over. This would change the events of the time loop around you, possibly allowing for new ways of completing different Quests for finding quicker ways of completing a Quest as time is always an issue.

Some of these concepts, particularly completing a Quest changes the Time Loop, are in the demo, but the overall structure of how they interact with each other is not at the moment. 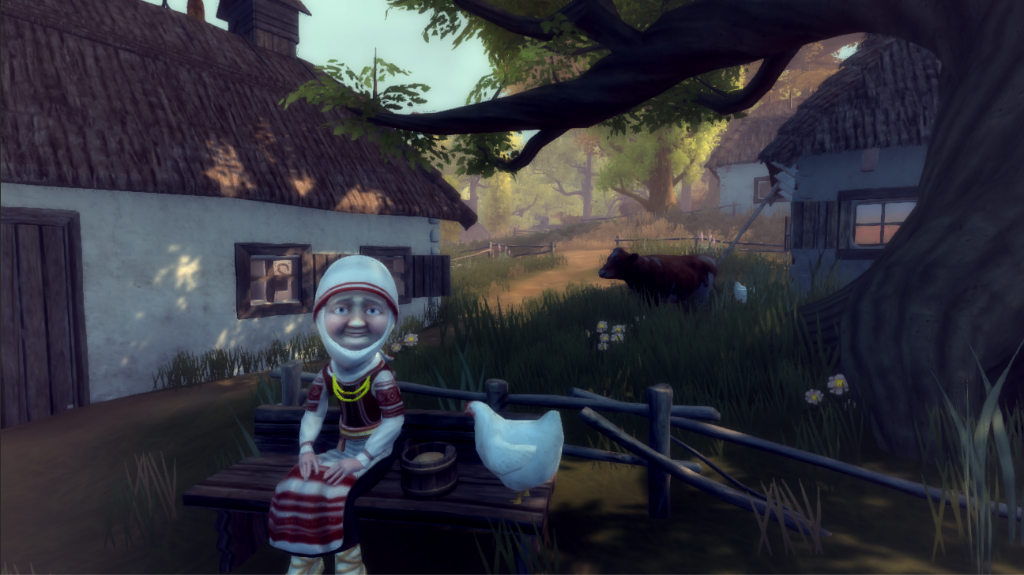 For my role on this Project as the Lead Game Designer there is very little I wasn't involved in. Being a team of 3, with some outside help (particularly artists and programmers), I had a lot of responsibilities. I was hugely influential in defining the game mechanics, game structure, game pillars, and narrative elements of this game. That was probably my main duty. To prove them to the team, I would either present a document, or have them play some sort of Paper Prototype. In the past, I have made PowerPoint/Twine choose your own Adventure Quests for people to play through.

Outside of that, I was the main developer on the Demo. I created and laid out the Quests in the demo and worked to make sure the logic held together. I wrote (along with Sean) much of the dialogue throughout the game with a large focus on giving Players relevant and quick information. I did a lot of C# scripting to get the demo to work. And so many more. I learned FMOD which is kind of hard to do with their terrible documentation.

Currently, Colabee Studios is looking to get this game funded and it is still in development. Unfortunately however, they did not have enough funds to keep me employeed with Colabee Studios.