Never Alone: FoxTales is the DLC follow up to Never Alone. Seemingly, the game takes place before the events of Never Alone and follow Nuna and Fox on a brand new adventure. The story is based upon an old indigineous story called the "Two Brothers" a story about two brothers who go and fight a Giant Mouse eating all who enter into the lake.

In our version of the story, Nuna and Fox gleefully chase after a small mouse at the start of spring. The mouse falls into the river and is swept away by the currents. Nuna and Fox realized that they just put the mouse in mortal danger and decided to go rescue it. They jump onto a boat chasing after the mouse.

Never Alone: FoxTales introduces new mechanics and puzzles to solve. The game places an even larger focuses on the puzzle aspects of the game. The majority of gameplay involves rowing a boat or swimming underwater on their adventure. This DLC runs for about an hour and a half and has been well received by fans of the original game.

The first playable prototype of Never Alone: FoxTales. Designed to test the complexity of the game mechanics.

With Never Alone done, the team moved on to bug fixing and patch work. But as that continued, the Design team started to brainstorm ideas for an extension of Never Alone. Development didn't start however until January. Looking back, it would have been greatly beneficial for the team to have started development of the DLC soon after we had shipped. 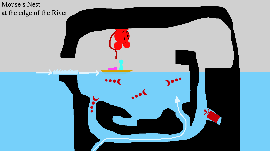 In January, I was tasked with designing the DLC. After many meetings and discussions, the team got excited about the story of a Giant Mouse, a boat and expanding upon the swimming mechanics. From the design side, we knew we wanted to push our game to the limit with what we could do with puzzle design in Never Alone. In the original, we felt that we hadn't really hit upon being a puzzle platformer. We also wanted to increase the amount of freedom and sense of exploration that the original was missing out on. The ability to swim and using water created this opportunity for more puzzle designs in our semi-realistic world setting.

During the design process, most of the team was further patching the original game. This gave me time to play around with the design some more. We conceptualized lots of different aspects and mechanics to do with a boat but ultimately decided to focus on a few key elements. One idea that was rejected was the idea that sometimes you would need to make a spirit move the boat out of the water and put it somewhere else. While fun, it would have been really different then the set of mechanics we were set upon.

With the pick up and drop mechanics, and the boating mechanics intriguing the team, the next step was to prototype it. Using the tools already created, I put together a really rough version of how the game would play. Seeing the potential, we said "Okay, lets do this." We spent a good amount of time drawing up puzzles on whiteboards and polishing them up in photoshop. We did this so we could make sure we could step through the puzzles before building them.

Most importantly, during this process, we put all of the puzzles together on a map. This let us very clearly see where there were going to be pacing issues or where we might not be using a mechanic enough. For Never Alone, we did this as well, per level, but another thing we thought didn't work out as great was that each level felt completely different from the others. Sometimes ideas would be introduced and then never used again. Each level felt like a different short story in a book as opposed to a complete narrative.

An early version of the beginning of the game.

Finally, after about 2 months, it was time to build this level as quickly as we could. Vincent, another designer at E-Line, continued to help me design or redesign the puzzles and began to help me greybox the level. In the video above, you can see a very early version of the opening parts of the game. One thing to notice is that the scale of some of the puzzles became much bigger in the final game. We were also surprised to see that it felt like our initial thoughts on progression and pacing were correct, as even at this early stage, the puzzles were coming together. 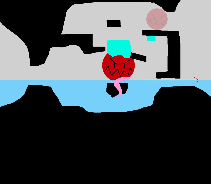 The final stretch of the Giant Mouse sequence was the element that was reworked the most amount of times. Essentially right up until we shipped it was constantly being changed in some way. Also, it works through pure magic, and I never want to see its inner wiring again.

I have found that when I design a level or a sequence, I rarely think about the mechanics first. I think about the emotions that I want the player to go through and then use the mechanics to help create that emotion. For example, the game starts with the Players chasing the mouse making the player want to jump, slide and have fun. The narrative says that the characters were happy, but so should the Players.